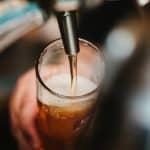 When it comes to man caves, UK shed owners often only see US-based projects featured online or on television. This isn’t necessarily a bad thing, as some American enthusiasts have completed some truly incredible man cave projects. These can serve as a great source of inspiration to us over here in England, but what if you want your man cave to have a more ‘British’ feel to it? Giant Bud Lite Signs and neon basketballs may not fit in quite as well in a garage in Scunthorpe as it does in a Cincinnati basement after all.

Luckily, you’ll only need very slight tweaks to make a man cave more at home in the UK. As the United Kingdom share so much culturally with the US already, you’ll find that there aren’t many huge differences between an American man cave and one on UK soil.

Turn any ‘bars’ into pubs with a draught beer dispenser

While not every man cave has a bar in it, you have to admit that most overwhelmingly do. If your shed or outbuilding already has some Americana themes though, it can be hard to portray a ‘British pub’ vibe with just a fridge stocked with bottles. That’s where a beer tap can help to provide a more authentic experience.

There are few countries in the world that have anything quite like the good old British pub, and if you’re planning on recreating that style within your own man cave, you’ll need to have the right drinks on tap. British breweries such as Vocation and Tennent’s manufacture kegs that are compatible with some dispensers, making it simple to enjoy a traditional pub experience at home.

A smart assistant by itself doesn’t bring any quintessential ‘Britishness’ to the table, but load it with the right ‘skills’ or apps, and you can really add to your man cave’s UK credentials.

Team your smart assistant up with your new draught beer dispenser, and invite your friends round for a pub quiz. Both the Google and Amazon offerings offer a wealth of trivia that will satisfy even the most experienced quizzer. Use your smart speaker to play some Britpop anthems in the background, and finish off the night by ordering fish and chips via Just Eat. You can even order your friends a black cab to get them home once you’ve called last orders!

Ditch the coffee maker and enjoy some tea

Is there anything quite as quintessentially English as tea? Despite the fact that it’s all imported from Asia, Brits have seemingly claimed the ‘cup of cha’ as their own. If your man cave is a little more sober than the many projects with home bars in, you probably have a coffee machine in there somewhere instead.

Whilst coffee has fostered an image that allows for fancy blends, tasting notes and dedicated machines, tea has been left behind. The simple teabag and kettle is often all that the tea-lover has at their disposal to satisfy their thirst.

That doesn’t mean that specialist tea makers don’t exist. Once you’ve upgraded, it might be difficult to go back to a standard brew after using one. These can set specific temperatures for certain teas, so if you love an oolong, but your guest wants an earl grey, you can make both to absolute perfection. With automatic controls for dunking your tea basket to control how strong you’d like your cuppa, these are the ultimate gadgets for anyone who values their tea.